THERE, BY THE EDGE OF THE GLOWING POND, KNELT THE MOTHER Magdalena, who was held hotly in a hypnotic hex.

Her dark hand, with its long and dark, graceful fingers, remained submerged in the precious Water, her Eyelids lightly closed. She was revitalizing herself, receiving strong, heavy waves of nourishing energy flow from the silvery pond and into her, charging her magic.

With this extremely pleasant sensation fueling her body densities, the Mother felt as high as the heavens. That familiar glorious sensation of being joyously immersed in the psychedelic cosmo-scape playground in the sky that had momentarily soothed her panic back when she was desperately attempting to flee her smoldering smashed spacecraft once again returned to her. But the version of the vision that now flooded her bio-rhythms was that alternate image she had had of herself swimming in deep space all by her lonesome.

As the daunting Full Moon up above shot its essence into the mysterious pond that may or may not’ve been there, the pulsing glow of the almighty Mother mimicked that brilliance; a triad of lunar luminosity linked the entities together, the prana gushing throughout.

The woman opened her Eyes to see herself shine vibrantly upon the shimmering fresh surface of the radiant waters in soft streams of her semblance so salient. 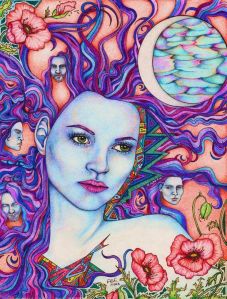 Gazing down at her reflection in wonder, the inner ends of her thin black Eyebrows now dropped down toward the upper ridge of her nose as a roguish grin slowly spread out over the Mother’s beautiful black face. Little ripples gently wrinkled over the reflection of the woman’s face in accord with the secretion of her subconscious sentiment, down into the aquatic enigma. The tiny currents cut into the cool, mercury-like liquid in flows like the flight of faeries, connecting to the consciousness of the invisible observer within like some pure watered-down air fueling a hot-air balloon in zero gravity.

Seeming lost, but being found, Magdalena continued to be completely engaged, stricken with awe, her sensations immersed in glorious dumbfounded ecstasy.

Amrita sat a ways off from the Mother, oblivious to it all.

Bonding emotionally with what she was perceiving, Lina was feeling a strong, unique sense of supreme personal power and dominance she could have sworn she had never felt before. It felt even more potent than the level of supremacy she typically carried. 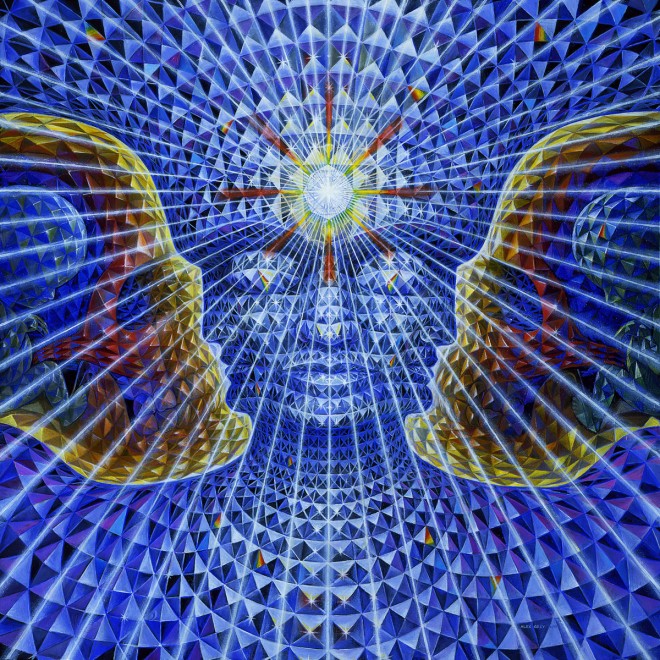 And soon, having become Wholly One with herself through the mystical pond and becoming Aware of the True depth of her actuality, the almighty Mother Magdalena released her reverie, switched stances to a lotus posture, and invited her lovable, shiny mechanical cat to come join her in the moment.

“Come sit right here beside me,” invited Lina with a gentle whisper excitedly, wide-smiled, rapidly patting Fucked-Earth in the space just to her right. Amrita cautiously crept close to the Mother candidly and curled up beside her.

Magdalena slowly raised a level hand firmly up in front of her shrewd visage and held it sideways before her Heart hotly. Like a dream-catcher she desired to soak up all of the intense harmonic astral vibes she now felt flowing all around her in a multiplex of multidimensional directions.

Minutes later, Amrita unexpectedly blurted out, “Lina, I see it! I see the pond all of a sudden! It just… appeared to me somehow…”

But before Magdalena could respond to her pet’s revelation, the Mother abruptly let out a yelp, grimaced, and brought her extended hand down fastly to her bulging belly.

“Uuhhhh … FUCK!” the woman wailed after a moment of intense physical pain.

And after another moment, “Con… trac-tion!” she muttered behind clenched teeth, Eyes rolling back into her skull.

Gripping her prego-mound with conviction, the Mother again yelped out ferociously, and it started to sound precarious in the chill-spot by the mystical pond.

The precious Magdalena soon found herself on hands and knees, sifting crudely in the dirt beside the pond as she was compelled to loudly howl most ferociously over and over again as her body shook about, periodically vomiting multi-colored liquids extravagantly, here and there adding exaggerated intention to her outbursts.

The woman was eventually able to calm her nerves just long enough to utter a few terse comprehensible words to her robotic companion.

“Rita… I’m gonna have her! My most long awaited beloved!” Lina was panting.

“What? You mean your child? Now?” asked Amrita with a head bob. The cat-bot had never experienced witnessing a woman’s behavior just before she was about to give birth.

Lina released a powerful elongated yelp that sounded inhuman as it echoed loudly throughout the fairly level, scorched terrain around her, and she grimaced forcefully.

The Mother was feeling her cervix softening, filling up with Hallowed Waters fast as the neck started to thin out and be taken into her lower uterine segment.

Before long, the powerless powered machine with a feline/human personality found itself cowering, disempowered, observing a tiny bloodied human head poke out of the Mother’s widening vagina.

“Yes! She’s here!!” the Mother yelped with excitement before letting out another gruesome wail of pain.

Lina started engaging her breaths with quick, deliberate rhythmic inhalations and exhalations, and reached down to lightly touch the birthing baby’s messy cranium. As it was emerging, Lina began a very personal ritualized procedure that included repeated periods of pushing her abdomen profoundly, taking short, measured breaths, and allowing her womb to naturally contract. She reached down with both hands upon her baby’s head, which was almost fully emerged, and lightly pulled on it, gently guiding her most beloved’s body out of her birth canal as she proceeded to deliver her infant baby daughter.

The One thing allowing the Mother to maintain this very arduous procedure — indeed the very entity causing this whole event to occur — was the big bright Full Moon Up Above, its radiance reflecting off the cool glittering pond, pouring into and above the Head of the Mother, fluxing its most forceful fuel therein. This aqua-flux offered Magdalena huge elements of spiritual encouragement; the mysterious pond seemed to somehow function like the PRAP-Q.C. — her old spaceship’s synchronoscope.

The Mother was clenching her teeth tightly, crying passionately.

Her Eyes were shut tight.

She was gripping her baby-bulge vehemently.

Soon, she was bawling out even more pronounced cordial cries of a most foul Lustful Agony, but while also chuckling Wickedly behind tightened jaw in interspersed impulsivities.

Indeed the Lunacy was setting in.

Amrita couldn’t understand the commotion occurring if the thing even wanted to. But it detected urgency and so gained the necessity to become an aid in the process.

“Are you okay?” asked Rita.

But just then, Lina’s upper body mystically thrust itself abruptly upward precisely twenty-four inches Higher to the sky, and held fast. She let out a loud scream.

The woman’s spine in one way or another now remained firmly fixed in space, somehow locked into position. Her long legs dangled in the air.

Suddenly, her Head inexplicably snapped backward and her whole body was violently shaken about as it remained in place just above the ground beside the pond.

The Mother let out a macabre, drawn out, deafening shriek of sheer horror.

The bloodied head of the precious Mandorla, who was patiently peeking out of her pussy, dropped another couple of centimeters out of the Mother’s vagina.

Lina cried out passionately. Loud and prominent screams they were at first, but they then quickly turned into maniacal, out-of-control, chaotic screeches of pure mania, and Amrita’s internal “warning” sign flashed in its circuitry. The cat-bot perked itself up on its hind legs, it’s motorized claws scraping at the air in vain upward at Mother Magdalena. It uttered a few meows that almost sounded like a cat’s.

“You’re beautiful. I love you,” murmured Amrita looking up at the Mother.

And then, just for a moment, just for One mere instance in space-time, the bright Full Moon Up Above brusquely utterly shut out it’s shimmer, just at the very same moment Magdalena also stopped sparkling so vibrantly. Even her enchanted, protective garb of golden elegance had also blown out its alluring radiance during that very instant, and the ambience totally transformed………… 😲