THE MEGA-PREGNANT MOTHER MAGDALENA UNFLAPPABLY MEANDERED onward through the pallid Darkness with a slouch atop the shadowy, scorched Earth, her scepter in seizure, Amrita by her side. She had her belly bulge in a desperate clutch and was feeling a cross between pissed off and delirious. She was unaware of precisely how long it had been since she had initially donned and activated the ancient, sanctified artifacts of Solaria’s golden, glowing dress and stone azure amulet subsequent to her formal Anointing, but the woman presumed it was getting close to at least six months’ time, for at least the time she was used to “keeping”.

And still the Sun did not rise.

There were no stars in the sky.

The only entity that could be seen from up above was the ultra-bright Full Moon which just barely lit enough sheen to guide the two on their way, the whereabouts of which remained a question in check, if indeed the duo were to query their course in the first place; for a while now the two lonely voyagers had been distraught, without a clue.

And, most curiously, the Full Moon did not even wax, nor wane all this time.

There was something missing.

Magdalena would stop to sleep atop the most unsoiled surface she would so happen to stumble upon, and usually only after becoming extremely exhausted. The abomination of desolation that graced the disgraced ground with devastation turned up everywhere the two took an unsteady stride.

The Mother had run out of food and water long ago, but miraculously her glorious golden garb was supplying her with the necessary vital hydration and nutrients she needed to survive. Amrita’s situation was also sustaining despite the treacherous conditions of the land and atmosphere; the robotic feline’s crystalline power-core had enough juice in it to keep it functioning for at least 60,000 more years.

The duo had remained mostly silent thus far throughout their heedless journey over the sullied scattered sediments of Fucked-Earth, neither individual having the urge to initiate conversation. Occasionally, Lina would fall upon the thought of what Solaria had demanded of her, as well as ponder the plenty of positions on precisely how on Fucked-Earth she would be able to carry the demands out. She felt frustrated but sucked it up as best she could, knowing there was nothing she could do to better the circumstance.

Every now and again throughout her travels Lina would receive a potent panicky sensation impulsively inch its way up the back of her throat, prompting in her a desire to scream and throw a fit. The woman would try hard to contain herself each time she became afflicted as such. She would occasionally call out to Solaria in hopes that the great power would heed her pleas, but the Mother never received a response. All along her travels, the heavy air of frustration over her predicament had not once loosened its grip on the Mother’s mood and aspirations.

The precious azure jasper amulet of Solaria, which was dangling against the cold Heart of the Mother, now began to suddenly tap into a communion with some foreign source she unexpectedly felt present on the planet at this time.

And it seemed to be calling to her!

Not two miles onward in the direction she felt drawn to by her amulet, Lina could faintly hear, as well as see on the fringes of her periphery, an ultra-high-frequency hum in the distance that was psychedelically pulsating a powerful cerulean sparkle that kept an Earthy, tribal rhythm at a steady tempo.

With a staticky jolt suddenly skulking up the back of her spine, Magdalena abruptly felt more at ease than she had in quite a while. Finally, she thought, there had been some sort of contact.

For the following several hours, she allowed herself to be gently lulled to the twinkling, subtle power that was reacting strongly with her amulet. Miraculously, Magdalena had become able to use the talisman’s intense powers to guide her through the muddled shadows and on toward the source that was indeed beckoning her so. 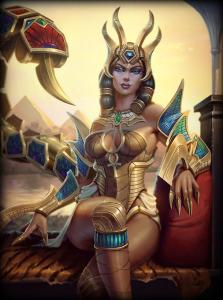 Having now a destination, the Mother so took stride with a whole different style.

Fully energized, Magdalena slowly started to glow more and more vividly about her chest as she came closer and closer to the source that was drawing her in.

After many hours of travel from that point onward, a great deal of the scattered scrap and piles of ashy junk that had littered the surface of the dark, charred terrain of which woman and pet had thus far traversed, spread out as they strode forth, the wreckage slowly clearing to dissipation so as to soon start to supply the scenery with the semblance of barren wasteland. As the duo kept on, the super-psychedelic energies that were emanating from Lina’s amulet grew stronger and stronger still.

Before long, a sparkling, most striking vision appeared in the distance that was a stark contrast to anything she had trekked past thus far. The vision was before the Mother, up ahead a ways, and clashing in confounding conflict with the expansive vista of charred wasteland she was immersed within.

And perplexed by it immensely, the Mother soon decided to regard the vision as mere mirage. After all, in all probability being the only creature roaming the planet post-apocalypse, there very well could be no telling at all whether she had become a complete lunatic.

But upon approaching the curious, shimmering image, Lina decided to have second thoughts about it being an hallucination. There was a subtle brightness that moved like a small sly siren of sorts over the midline of the floating watercourse that was twinkling enigmatically, very much in the manner of UFOs reported during the days of old.

She paused, bedazzled in sheer stupefaction.

Amrita popped a squat beside her. “What is it?” it asked the Mother.

“Rita, do you see that? Just ahead?” the Mother asked, hushed, pointing before her with her hand that was holding the iron-wrought scepter.

“What exactly are you referring to?” asked Amrita.

Lina tilted her head slowly to the left, all Eyes still locked onto the twinkling vision just before her. She bugged out her Eyes.

“Rita… I… Rita, there’s something there.”

The android shot a blank stare ahead and then looked back at Lina.

After a couple of minutes, she took a hard blink, shook her Head, and exhaled deeply, rubbing her Eyes.

“What do you see?” asked Lina’s mechanical companion insensibly.

Magdalena then caught a sudden ultra-vivid sensation of déjà vu the moment she somehow seemed to recognize the patterns in the blistered shatter cones embedded in the inglorious jagged substratum on either side of the apparent apparition, and she could feel tinges of radiation in the air that were bolstered by her mighty glowing golden dress. She felt exceedingly hot as she and Amrita continued to walk toward the vision, sweat starting to trickle down her face. Before the Mother shone enigmatically what seemed to her to be some sort of wavering, brilliant photo-sonic phantom waterbed of exquisite, glittering bright white light. And it had a blue tinge to it.

“There’s, like, a huge shimmering pond straight ahead, Rita…” Lina articulated slowly, “like, floating above the ground… wow, it’s beaming, Rita!” The seeming mystifying body of water mimicked the bright Full Moon up above most brilliantly.

“I see no such thing,” remarked Amrita.

The woman slowly stepped toward the vision before her, Amrita stealthily slinking along by her side with reluctance.

About thirty-three yards ahead, Lina came to a stop.

Her jasper amulet was now emitting so much energy that her whole torso glowed vigorously with hazy light-blue rays that exuded off of her in slothful, glossy wisps.

Before her, there seemed to exist a calm, clean, fresh glowing pond hovering just slightly over the ground with wonderfully shiny reflections rippling through it in silver sparkles that were emblazoned with golden lace.

And it had a blue tinge to it.

Mouth widened with mystery, Lina reached her hand out to touch the water and her fingers slipped into the wetness dreamily. She lightly latched up her Eyelids and allowed the tranquil essence of the liquid to enfold her wrist.

There, Magdalena remained, expressionless, mesmerized for a timeless instant. During the occurrence, her experience was psychedelically imprinted onto the morphogenetic field of the human race at a particularly high frequency.

Before long, the entire body of the Mother was surging with warm, potent prana, and she became extremely euphoric. A peaceful smile had been forged upon the precious disgraced face of the gorgeous dark Mother. Her upper body, and now also the area of perceived space three feet directly above her head, had begun shining big beams of white light outward, with hazy blue wisps exuding from the beams’ edges. It was getting so bright within the local vicinity that Lina almost forgot that the flora and fauna of Fucked-Earth still boasted a most murky nocturnal ambiance all elsewhere.

One thought on “☆ 22. Special Signet Spot Zero: No One and the Mother lock onto the Grail”